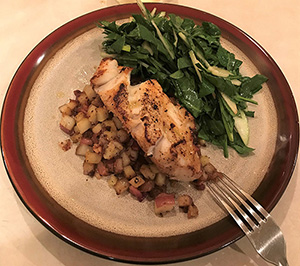 This is a little more complex of a meal to prepare, but it came out awesome with great flavor, very filling but light feeling after we were done eating.  I made extra of the hash so we could reheat it in the morning with fried eggs on it and it was an amazing breakfast.

Put all ingredients together in a bowl and mix them well, making sure to smash the butter and combine them well, set aside until you are ready to bake the cod.

I make my vinaigrettes with a blender stick but if you don’t have one available you can easily whisk the product together.  Make this ahead of time and refrigerate it so it will hold its emulsification, shake it before each use.  In a bowl mix the vinegar, honey, mustard and all spices together, either whisking or blending them and slowly drizzle in both oils until they are fully incorporated.

Use a large high sided sauté pan and heat the oil with bacon in it on medium low heat, you just want to render the bacon and cook the fat out slowly without getting the bacon too crispy.  While the bacon is rendering peel the onion and sweet potato, small dice them and the red potatoes.  Once the bacon is rendered, remove the bacon from the pan with a slotted spoon and put in a paper towel lined plate, add the onions and cook until they start to caramelize.  Once the onions are caramelized add the potatoes, season with the salt and pepper, cover the pan with a lid.  Cook the hash for 5 minutes, stir it to avoid sticking and cover for another 5 minutes.  At this point the potatoes should be soft, remove the lid and increase the heat to medium and cook until the potatoes develop a crust.  Add the garlic and bacon, cook for 2 more minutes.  Once it is cooked you can hold it on low with the lid on to keep it warm until everything else is ready.

When you are ready to plate dinner, mix all ingredients together, taste for seasoning and adjust with more dressing, salt and pepper to your liking.

Heat the oven to 400 degrees.  Lightly season the cod with sea salt and black pepper.  Lightly oil a baking dish to prevent the cod from sticking, place the cod in the dish and divide the butter into 4 parts and spread it over the fish.  Bake the fish for 10 minutes, might need a little more time depending on the thickness of the cut.

Once the fish is cooked, dish up the hash, fish on top and the salad, drizzle the fish and hash with the vinaigrette.  We served this dish with a nice crisp sauvignon Blanc, the bright fruit flavor and dry taste complimented the sweet and salty dish quite nice.

Previous
All Recipes
Next